The Day of the LORD

The purpose of this post is not to determine the issue as to whether the day of the LORD is Sunday, or Easter or Resurrection Day or Christmas………….This study is to understand the eschatological explanation of the Day of the LORD according to the Bible.

If we were list of things yet to happen culminating in the end of one age and the beginning of another, generally speaking the following has yet to happen: 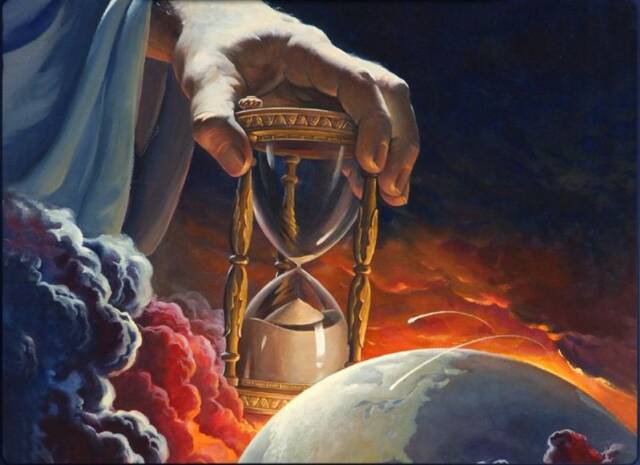 The aforementioned events are yet to happen but I submit to you they may be on the verge of happening soon. Sooner then we think. As Jack Palance would say, “Believe it……..or not!”

Ultimately, my sincerest prayer is that this website would be a witnessing tool to bring many to the saving knowledge of Jesus Christ as their LORD and Savior. In addition, it would enable the believer in Christ to grow in the grace and knowledge of Jesus Christ to better serve the LORD and help prepare the way for His eventual return. That being said, let us explore what the Word of God tells us regarding the Day of the LORD:

The LORD will first rapture the faithful Church but He ultimately returns with it. The period that commences after the rapture of the Church will also usher in what is known as the “Time of Jacob’s trouble”:

Jeremiah 30:4-7 —–And these are the words that the LORD spake concerning Israel and concerning Judah. For thus saith the LORD; We have heard a voice of trembling, of fear, and not of peace. Ask ye now, and see whether a man doth travail with child? wherefore do I see every man with his hands on his loins, as a woman in travail, and all faces are turned into paleness? Alas! for that day is great, so that none is like it: it is even the time of Jacob’s trouble, but he shall be saved out of it.

Daniel 12:1 —And at that time shall Michael stand up, the great prince which standeth for the children of thy people: and there shall be a time of trouble, such as never was since there was a nation even to that same time: and at that time thy people shall be delivered, every one that shall be found written in the book.

Matthew 24:15-22 —When ye therefore shall see the abomination of desolation, spoken of by Daniel the prophet, stand in the holy place, (whoso readeth, let him understand:) Then let them which be in Judaea flee into the mountains: Let him which is on the housetop not come down to take any thing out of his house: Neither let him which is in the field return back to take his clothes. And woe unto them that are with child, and to them that give suck in those days! But pray ye that your flight be not in the winter, neither on the sabbath day: For then shall be great tribulation, such as was not since the beginning of the world to this time, no, nor ever shall be. And except those days should be shortened, there should no flesh be saved: but for the elect’s sake those days shall be shortened.

The age of the Church will end and the Time of Jacob’s trouble and the salvation of the nation of Israel will become the central element in the purpose of God on earth. Israel and the Jews will be in the worst turmoil ever and the surviving remnant of the Jews and Gentiles will enter the Millennial Kingdom after the Day of the LORD comes to pass.

The Day of the LORD is  not a 24 hour day, but rather a series of events in which the wrath of God is poured out on those who are not raptured, including the persecutors of the true Church and the haters of the nation of Israel. It will also culminate in God’s prevailing justice of the kingdom of AntiChrist.

Amos 5:16-20—Therefore the Lord, the God of hosts, the Lord, saith thus; Wailing shall be in all streets; and they shall say in all the highways, Alas! alas! and they shall call the husbandman to mourning, and such as are skilful of lamentation to wailing. 17 And in all vineyards shall be wailing: for I will pass through thee, saith the Lord. 18 Woe unto you that desire the day of the Lord! to what end is it for you? the day of the Lord is darkness, and not light. 19 As if a man did flee from a lion, and a bear met him; or went into the house, and leaned his hand on the wall, and a serpent bit him. 20 Shall not the day of the Lord be darkness, and not light? even very dark, and no brightness in it?

Each day that passes by we see the nation of Israel becoming more alienated from the rest of the world. Several nations that once were considered allies are no longer supporting her. Israel is beginning to find that she has no allies. This was all spoken of in the Bible.

Joel 3:1-2—–For, behold, in those days, and in that time, when I shall bring again the captivity of Judah and Jerusalem, 2 I will also gather all nations, and will bring them down into the valley of Jehoshaphat, and will plead with them there for my people and for my heritage Israel, whom they have scattered among the nations, and parted my land.

Did you see that? parted the LORD’s land. Did I hear “Land for Peace” deals??

Zechariah 12: 2—-Behold, I will make Jerusalem a cup of trembling unto all the people round about, when they shall be in the siege both against Judah and against Jerusalem. 3 And in that day will I make Jerusalem a burdensome stone for all people: all that burden themselves with it shall be cut in pieces, though all the people of the earth be gathered together against it. 4 In that day, saith the Lord, I will smite every horse with astonishment, and his rider with madness: and I will open mine eyes upon the house of Judah, and will smite every horse of the people with blindness. 5 And the governors of Judah shall say in their heart, The inhabitants of Jerusalem shall be my strength in the Lord of hosts their God. 6 In that day will I make the governors of Judah like an hearth of fire among the wood, and like a torch of fire in a sheaf; and they shall devour all the people round about, on the right hand and on the left: and Jerusalem shall be inhabited again in her own place, even in Jerusalem. 7 The Lord also shall save the tents of Judah first, that the glory of the house of David and the glory of the inhabitants of Jerusalem do not magnify themselves against Judah. 8 In that day shall the Lord defend the inhabitants of Jerusalem; and he that is feeble among them at that day shall be as David; and the house of David shall be as God, as the angel of the Lord before them. 9 And it shall come to pass in that day, that I will seek to destroy all the nations that come against Jerusalem. 10 And I will pour upon the house of David, and upon the inhabitants of Jerusalem, the spirit of grace and of supplications: and they shall look upon me whom they have pierced, and they shall mourn for him, as one mourneth for his only son, and shall be in bitterness for him, as one that is in bitterness for his firstborn.

What is for unbelieving Israel is not for the faithful Church. We need to understand that tribulation is one thing. Whereas the wrath of God is entire something else. Once the Rapture of the Church commences, those who have not been removed will find themselves in the Day of the Lord and may be objects of His wrath. Even from this only a few will survive and be saved.

Zechariah 14:1-9 —–Behold, the day of the Lord is coming, And your spoil will be divided in your midst. 2 For I will gather all the nations to battle against Jerusalem; The city shall be taken, The houses rifled, And the women ravished.
Half of the city shall go into captivity, But the remnant of the people shall not be cut off from the city. 3 Then the Lord will go forth And fight against those nations, As He fights in the day of battle. 4 And in that day His feet will stand on the Mount of Olives, Which faces Jerusalem on the east and the Mount of Olives shall be split in two, From east to west, Making a very large valley; Half of the mountain shall move toward the north And half of it toward the south. 5 Then you shall flee through My mountain valley, For the mountain valley shall reach to Azal. Yes, you shall flee As you fled from the earthquake In the days of Uzziah king of Judah. Thus the Lord my God will come, And all the saints with You. 6 It shall come to pass in that day That there will be no light; The lights will diminish. 7 It shall be one day Which is known to the Lord— Neither day nor night. But at evening time it shall happen That it will be light. 8 And in that day it shall be That living waters shall flow from Jerusalem, Half of them toward the eastern sea And half of them toward the western sea; In both summer and winter it shall occur. 9 And the Lord shall be King over all the earth. In that day it shall be— “The Lord is one,”  And His name one.

Once again to put it into simplest terms, when the LORD comes and removes the faithful Church and unleashes His wrath on this earth and on the kingdom of AntiChrist, He will be intervening in the strategic conflict against the nation of Israel. This is the Day of the LORD. It is now very obvious to discern what is about to take place in the Middle East. In the map below the little red portion is Israel. The green portion is all the countries that are Islamic and are not too fond of Israel: