In the previous post, it was mentioned that as early as last week, Israeli General Israel Ziv reported in Jerusalem that Iranian general officers have taken command of the Syrian front within six miles of the north-east border of Israel, along with 10,000 “volunteers” from Iran, Iraq and Afghanistan.

This dangerous development may lead to a fast-spreading regional war in the Middle East. An Iranian attack against the Golan Heights would trigger Israeli defenses in depth in Syria. Iran could potentially bring more than 100,000 Basiji into the battle, as well as IRGC troops. If Israel is directly threatened, it may well resort to unconventional weapons, and even launch a counter-attack against Iran itself. In previous wars Israel has counter-attacked into Syria and Egypt. 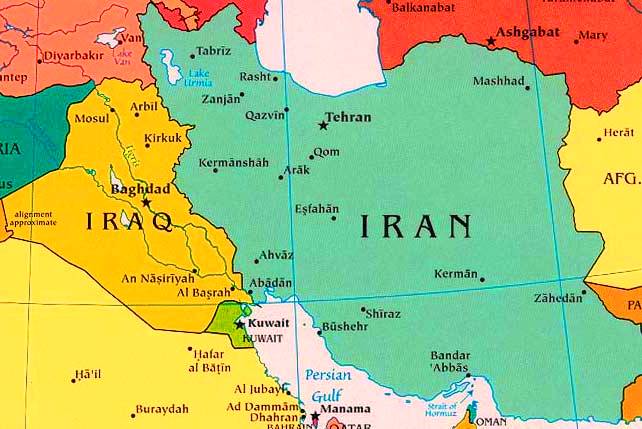 Now it is being reported that an adviser to Iranian President Hassan Rouhani has said that Iran’s historic empire has been restored with Baghdad as the capital, according to Saudi owned regional Arabic daily Al-Arabiya.

Ali Younesi, an adviser to President Rouhani said that “Iran today has become an empire like it used to be throughout its history and its capital now is Baghdad and it is the center of our civilization, culture and identity, today as it was in the past.” This was a reference to the Persian Sassanid Empire that ruled before Islam was returning, which conquered Iraq and had Baghdad as a capital.

Younesi is not the first Iranian politician to boast of Iran’s renewed regional influence. Last september Ali Reza Zakani, a member of the Iranian parliament, boasted that Iran now rules four Arab capitals, Baghdad, Damascus, Beirut and Sanaa. The above mentioned cities are in Iraq, Syria Lebanon and Yemen.

The Iranian president’s advisor’s comments came two days after the Saudi Foreign Minister, Prince Saud al-Faisal’s comments during a press conference with his US counterpart, John Kerry, during which he stressed that “Iran controls Iraq”, citing the example of the Tikrit Operation carried out by Iraqi forces, together with the Shiite militia and Iranian troops preceded Qassem Soleimani.

Observers say that Iraq is today occupied by Iran, and its military presence in Tikrit, limited only, as reports indicated that Iranian troops reached the Iraqi province of Diyala, northeast of Baghdad, under the guise to fight ISIS.

Could this possibly mean that Persia is declaring an empire while Saudi Arabia is concerned for its own safety and is seeking  to find a solution and sees the writing on the wall.

If you look at the map below, notice the countries of Iraq, Syria, Lebanon and Yemen:

These countries are surrounding Saudi Arabia. Even West of the Red Sea you are finding a more fundamental Islam that many believe is in alliance with Iran.

The Middle East is one of the world’s continual hotbeds for conflict. In recent years Middle East conflicts have seriously impacted the Western world. The September 11, 2001, attack on the United States and subsequent disturbances in European capitals were spawned by tensions in the Middle East.

Nations today realize that a major Middle East war could easily escalate far beyond that region. As a result, many countries watch what is happening in the Middle East with serious concern. It seems only a matter of time before the next conflict breaks out.

The prophet Zechariah speaks of this time just before the coming of the Messiah:

Zechariah 14:2—For I will gather all the nations to battle against Jerusalem; the city shall be taken

This will not be just another Middle East conflict. It will be a time of world conflict.  Jesus Christ predicted in the Olivet Discourse:

Matthew 24:21—For then there will be great tribulation [widespread war and suffering], such as has not been since the beginning of the world until this time, no, nor ever shall be

This time of world war, invasion of the Middle East, and the fall of Jerusalem will precede Christ’s second coming.

Right now Iran is a fierce enemy of Israel and wants to wipe Israel off the map. Literally, a nuclear reactor sits in Bushehr, Iran and according to what was stated in Benjamin Netanyahu’s speech last week, quite possibly for the purpose of destroying Israel. Thus, Iran is Israel’s most dangerous enemy.  Iran is also the center of Sh’iite Islam which wants to conquer the world for their God. It is the center of belief in the Mahdi who the Shi’ite Muslims believe will lead Islam to conquer the world. Iran can be viewed as the number one enemy of the God of Israel. Shi’ite Islam led by Iran is about to violently collide with God’s End-Time prophetic plan as stated in the Bible.