Once a year, on the 9th day of the Hebrew month of Av, Jews fast, cry and mourn for the destruction of their Holy Temple. They long for the rebuilding of an edifice that was destroyed 2,000 years ago.

Jerusalem has seen two temples built on the Temple Mount. The first was built by King Solomon close to 3,000 years ago. It was destroyed by the armies of Nebudchadnezzar in 586 B.C. The second temple was built under Zerubbabel during the years 520-516 B.C. This was destroyed by the Romans in 70 A.D. Since that time there has been a deep longing amongst many observant Jews both out in the Diaspora and back in the land of Israel to see the temple rebuilt once again. 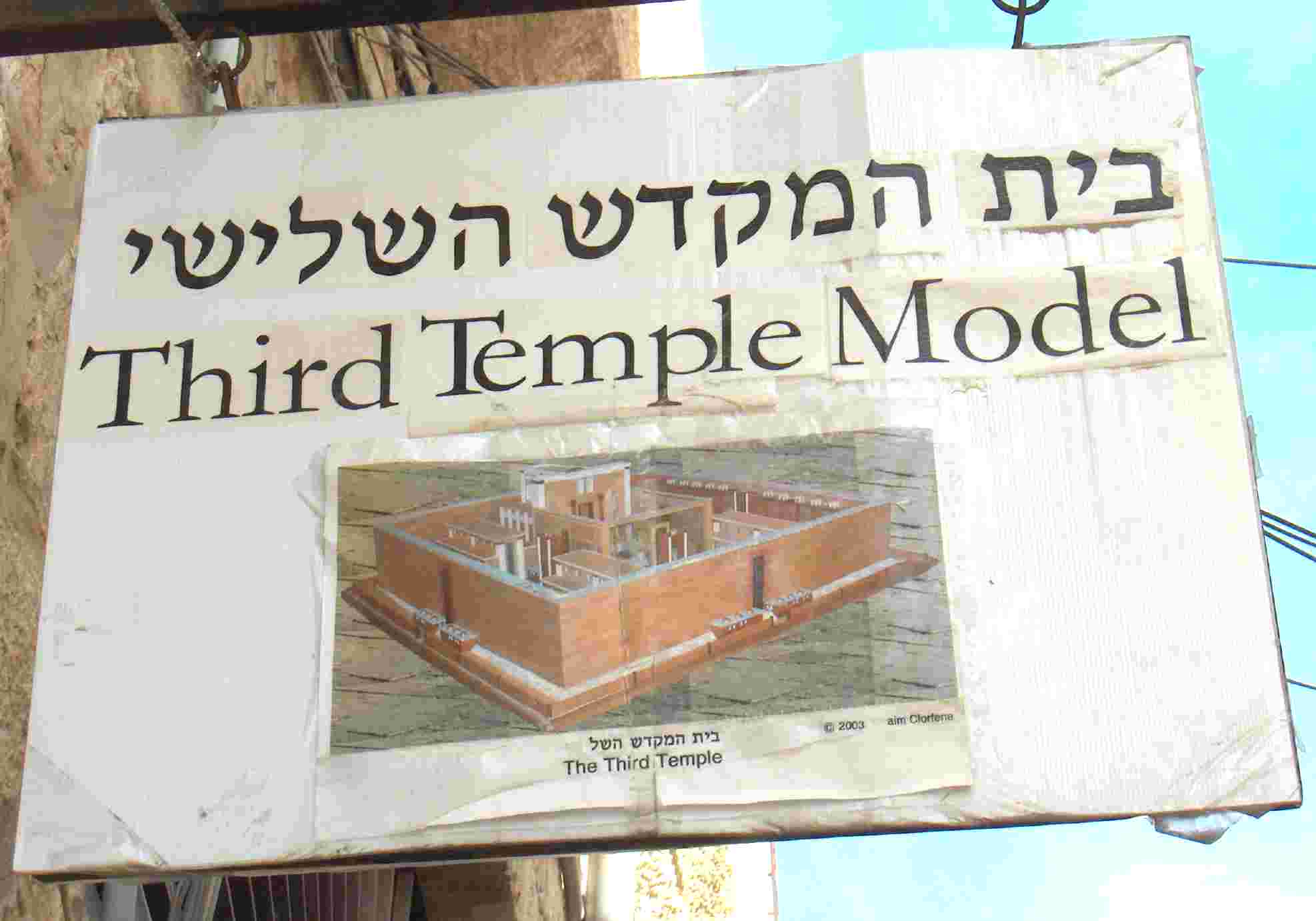 At the present time the construction of the Third Temple is quite impossible from a political standpoint. The Temple Mount area is currently under strict Islamic control. But the prophetic scriptures indicate that the temple will indeed be rebuilt.

At some point there will be a new peace on the Temple Mount. And in this peace the Third Temple will be constructed. However, this peace may come after a future war in the Middle East ignites.  Will it be Psalm 83? Will it be Jeremiah 49:34-39?? Will it be the destruction of Syria mentioned in Isaiah 17. Or will it be Ezekiel 38-39?? (PLEASE SEE PREVIOUS FOUR-PART POST ON THE WAR OF GOG AND MAGOG.)

The Bible repeatedly describes the Temple as the spiritual center of the world and the source for peace and prosperity.

Over the past decade there has been a growing “Movement” to rebuild the temple in Israel today with thousands of Jews working to rebuild the temple. According to a poll taken last year in a leading newspaper Ha’aretz, one third of Israelis believe that Israel should erect the Temple on the Temple Mount. Just last year, Israel’s Housing Minister called publicly for the rebuilding of the Temple, “We’ve built many little, little temples,” MK Uri Ariel said, referring to synagogues, “but we need to build a real Temple on the Temple Mount.”

Schools throughout Israel are diligently studying the laws of the temple and Jews of all backgrounds visit the Temple Mount each month. The Jerusalem Post quoted Sarit Berko, a non-observant Israeli who came to the Western Wall to observe the 9th of Av from her home in Tel Aviv, an annual pilgrimage she has made since the Six Day War in 1967. “During Passover, most Jews say ‘Next year in Jerusalem’,” explained Berko, “As an Israeli I pray, ‘Next year may the Third Temple be built and last for eternity.’

The Temple is such a central theme in the Bible that one third of all its commandments deal with laws carried out in it. In the near future it will be rebuilt and partof it will be given over to the gentiles:

Revelation 11:1-2—–And there was given me a reed like unto a rod: and the angel stood, saying, Rise, and measure the temple of God, and the altar, and them that worship therein. 2 But the court which is without the temple leave out, and measure it not; for it is given unto the Gentiles: and the holy city shall they tread under foot forty and two months.

Forty and two months is equivalent to 3.5 years which in itself is half of seven, or quite possibly midway through the last seven years of history prior to the Return (NOT THE RAPTURE OF THE CHURCH) of the Lord Jesus Christ. These seven years have been referred to by many scholars as the Tribulation.

The Temple Institute in Jerusalem has announced that it has finished building an altar that can be utilized for Temple service. The altar, which took several years to build, can be operational at little more than a moment’s notice, reported Matzav Haruach magazine.

The Temple Institute is committed to preparing all the necessary clothing and tools for the rebuilt Holy Temple in Jerusalem. In addition, the institute operates an educational center for visitors and a preparatory training program for members of the Aaronic priesthood who wish to be ready to serve as soon as the Temple is rebuilt.

What makes the altar so unique is it that it can be disassembled and reassembled easily, allowing it to be transported quickly and efficiently from its current location, on display at the institute, to the Temple Mount when the time comes. It was inaugurated in December 2014 ……..AND IS NOW READY FOR USE.

With Passover just a few weeks away, and the Passover sacrifice a central component of the traditional celebration, perhaps that time will come soon!

Just how will this Middle East peace be achieved? What will have happened to suddenly change the political landscape in the Middle East and thus open the way to allow the temple to be rebuilt? A new “prince” will have come into power. But who will this man be? And in whose name will he come? Will he turn out to be the peacemaker or power broker spoken of by the prophet Daniel? Shall we come face to face with the long awaited peacemaker of Daniel 9:27:

Daniel 9:27–And he shall confirm the covenant with many for one week: and in the midst of the week he shall cause the sacrifice and the oblation to cease, and for the overspreading of abominations he shall make it desolate, even until the consummation, and that determined shall be poured upon the desolate.

This future seven year covenant will be different. The finalsolution of the “Road Map to Peace” will be on the front pages of our newspapers and News websites on Fox and CNN cable news. This seven year peace deal or covenant will kick off  the final seven year history of this world spawning earthshaking political events of Biblical proportions.

When this covenant is signed and confirmed there will be major international consequences. Great and awesome events will start to happen as the Holy God of Israel resumes His determined covenant dealings with the nation of Israel and the rest of the world.

Zechariah 12:1-11—The burden of the word of the Lord for Israel, saith the Lord, which stretcheth forth the heavens, and layeth the foundation of the earth, and formeth the spirit of man within him. 2 Behold, I will make Jerusalem a cup of trembling unto all the people round about, when they shall be in the siege both against Judah and against Jerusalem. 3 And in that day will I make Jerusalem a burdensome stone for all people: all that burden themselves with it shall be cut in pieces, though all the people of the earth be gathered together against it. 4 In that day, saith the Lord, I will smite every horse with astonishment, and his rider with madness: and I will open mine eyes upon the house of Judah, and will smite every horse of the people with blindness. 5 And the governors of Judah shall say in their heart, The inhabitants of Jerusalem shall be my strength in the Lord of hosts their God. 6 In that day will I make the governors of Judah like an hearth of fire among the wood, and like a torch of fire in a sheaf; and they shall devour all the people round about, on the right hand and on the left: and Jerusalem shall be inhabited again in her own place, even in Jerusalem. 7 The Lord also shall save the tents of Judah first, that the glory of the house of David and the glory of the inhabitants of Jerusalem do not magnify themselves against Judah. 8 In that day shall the Lord defend the inhabitants of Jerusalem; and he that is feeble among them at that day shall be as David; and the house of David shall be as God, as the angel of the Lord before them. 9 And it shall come to pass in that day, that I will seek to destroy all the nations that come against Jerusalem. 10 And I will pour upon the house of David, and upon the inhabitants of Jerusalem, the spirit of grace and of supplications: and they shall look upon me whom they have pierced, and they shall mourn for him, as one mourneth for his only son, and shall be in bitterness for him, as one that is in bitterness for his firstborn. 11 In that day shall there be a great mourning in Jerusalem, as the mourning of Hadadrimmon in the valley of Megiddon.

Ladies and gentlemen, we are sure to witness as spoken of by the prophet Zechariah (see above) an increasing global emphasis on the final status of Jerusalem. Will it be divided? Will there be a peace made between the Jews and the Palestinians? Already the Vatican has positioned itself to possibly broker an international solution to the centuries long Jewish-Arab conflict and an internationalization of the old city of Jerusalem. We should anticipate more political and diplomatic activity of this very kind.

Psalm 122:6—Pray for the peace of Jerusalem: they shall prosper that love thee.