Consider the following post as a follow-up to the two-part post titled Bible Prophecy: Meat in Due Season……..

There has got to be a legitimate reason as to why there has been so little interest within the Body of Christ in regarding the study of Bible prophecy. The reason is very straightforward: Satan hates Bible prophecy.

In no means do I want to give credit or acknowledge our adversary for his tactics. The Bible clearly instructs us not to be ignorant of the enemies devices:

2 Corinthians 2:9-11—For to this end also did I write, that I might know the proof of you, whether ye be obedient in all things.  To whom ye forgive any thing, I forgive also: for if I forgave any thing, to whom I forgave it, for your sakes forgave I it in the person of Christ; Lest Satan should get an advantage of us: for we are not ignorant of his devices.

He has been steadfastly active in making it a surety to keep God’s people out of it. The common lie often whispered in the ears of Christians is they will either be confused or lack understanding. The Bible tells us otherwise:

1 Corinthians 14:33–For God is not the author of confusion, but of peace, as in all churches of the saints.

2 Timothy 1:7—For God hath not given us the spirit of fear; but of power, and of love, and of a sound mind.

Our adversary also minimizes the importance of the prophetic Scriptures to daily living. Consequently, many are attempting to live without the benefit of the prophetic Word of God. My friends, this ought not be.

I want to ask you a very simple question? Who was the first person to receive a prophecy from God? Let’s find out: 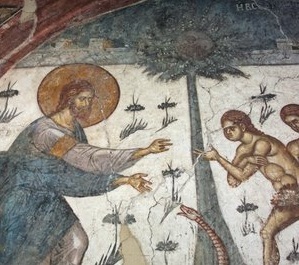 Genesis 3:14-15—-And the Lord God said unto the serpent, Because thou hast done this, thou art cursed above all cattle, and above every beast of the field; upon thy belly shalt thou go, and dust shalt thou eat all the days of thy life: And I will put enmity between thee and the woman, and between thy seed and her seed; it shall bruise thy head, and thou shalt bruise his heel. Unto the woman he said, I will greatly multiply thy sorrow and thy conception; in sorrow thou shalt bring forth children; and thy desire shall be to thy husband, and he shall rule over thee.  And unto Adam he said, Because thou hast hearkened unto the voice of thy wife, and hast eaten of the tree, of which I commanded thee, saying, Thou shalt not eat of it: cursed is the ground for thy sake; in sorrow shalt thou eat of it all the days of thy life;

Interesting to note that before God addressed Adam and Eve He first spoke to the serpent after the Adam and Eve sinned in the Garden. Once the prophecy had been set forth, the beginning of its fulfillment became the next act. Satan was immediately placed on the defensive.

He would have to either circumvent it or delay it as long as he could. As soon as he heard these prophetic words from God, he began to cause trouble between the seed of the women. Note that from Genesis 3:15 and four thousand years onward, the enemy has tried to finish an impossible task: to cut off the Seed of the woman.

Currently, the enemy is trying to oppress, suppress & ultimately attempt to eradicate the nation of Israel and let me submit to you, he will again, fail, again. During World War II 1 out of every 3 Jews were killed. According to the Holy Scriptures there is yet another Holocaust is on the horizon.

Zechariah 13:8-9 —And it shall come to pass, that in all the land, saith the Lord, two parts therein shall be cut off and die; but the third shall be left therein. And I will bring the third part through the fire, and will refine them as silver is refined, and will try them as gold is tried: they shall call on my name, and I will hear them: I will say, It is my people: and they shall say, The Lord is my God……….. Now as you read this in context, notice the very next chapter:

Zechariah 14:1-4—Behold, THE DAY OF THE LORD cometh, and thy spoil shall be divided in the midst of thee. For I will gather all nations against Jerusalem to battle; and the city shall be taken, and the houses rifled, and the women ravished; and half of the city shall go forth into captivity, and the residue of the people shall not be cut off from the city. Then shall the Lord go forth, and fight against those nations, as when he fought in the day of battle. And his feet shall stand in that day upon the mount of Olives, which is before Jerusalem on the east, and the mount of Olives shall cleave in the midst thereof toward the east and toward the west, and there shall be a very great valley; and half of the mountain shall remove toward the north, and half of it toward the south.

There are currently 40 nations that have a Muslim majority in this world. Out of those 40 nations, 37 openly refuse to recognize the very existence of Israel. Otherwise it proves Islam to be a false religion.

As a matter of fact, most textbooks in their schools have maps of the Middle East and Israel is NOT on the map! 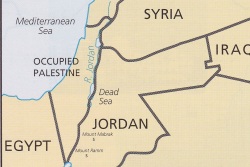 Is it a surprise that the leadership of Iran wants Israel annihilated? Despite there religious differences both Shi’ite and Sunni moslems have always had a dislike for Israel. Both Arab and non-Arab moslems are not too fond of Jews. As a matter of fact, Israel has had to suffer the brunt of not being liked by all nations because they did not hearken to the Words of the Lord:

Deuteronomy 28:66—And it shall come to pass, that as the Lord rejoiced over you to do you good, and to multiply you; so the Lord will rejoice over you to destroy you, and to bring you to nought; and ye shall be plucked from off the land whither thou goest to possess it. And the Lord shall scatter thee among all people, from the one end of the earth even unto the other; and there thou shalt serve other gods, which neither thou nor thy fathers have known, even wood and stone. And among these nations shalt thou find no ease, neither shall the sole of thy foot have rest: but the Lord shall give thee there a trembling heart, and failing of eyes, and sorrow of mind:And thy life shall hang in doubt before thee; and thou shalt fear day and night, and shalt have none assurance of thy life:

However, God NEVER forsook His covenant with Israel and this is a fundamental point in understanding why the Rapture has to happen and why God will deal exclusively with Israel after the faithful Church is caught up to be with Him.

Ezekiel 16:59-63—For thus saith the Lord God; I will even deal with thee as thou hast done, which hast despised the oath in breaking the covenant. Nevertheless I will remember my covenant with thee in the days of thy youth, and I will establish unto thee an everlasting covenant.  Then thou shalt remember thy ways, and be ashamed, when thou shalt receive thy sisters, thine elder and thy younger: and I will give them unto thee for daughters, but not by thy covenant. And I will establish my covenant with thee; and thou shalt know that I am the Lord: That thou mayest remember, and be confounded, and never open thy mouth any more because of thy shame, when I am pacified toward thee for all that thou hast done, saith the Lord God. (Folks, this is jut one of many Scriptures that testify to the fact that God’s Covenant with Israel was unconditional.) Replacement Theology, which is another lie of the enemy and this doctrine states that the Church has “replaced” Israel and that God is finished with Israel. Remember I mentioned not to be ignorant of the enemy’s devices and that our adversary decided to join the Church:

2 Peter 2:1-2—But there were false prophets also among the people, even as there shall be false teachers among you, who privily shall bring in damnable heresies, even denying the Lord that bought them, and bring upon themselves swift destruction. And many shall follow their pernicious ways; by reason of whom the way of truth shall be evil spoken of.

2 Timothy 4:1-4—I charge thee therefore before God, and the Lord Jesus Christ, who shall judge the quick and the dead at his appearing and his kingdom; Preach the word; be instant in season, out of season; reprove, rebuke, exhort with all long suffering and doctrine. For the time will come when they will not endure sound doctrine; but after their own lusts shall they heap to themselves teachers, having itching ears; And they shall turn away their ears from the truth, and shall be turned unto fables.

Anyways, a fundamental issue in theology is the question of whether the Bible is a supernatural book inspired by God and therefore an authoritative and accurate record of what God wants us to know about the past, present & future.

The study of prophecy has no significance if the Bible is not accepted for what it is, the very Word of God.

While prophecy depends on belief in the Bible as the inspired Word of God, it also constitutes clear evidence that the Bible is the Word of God.

The fact that half of the Bible’s approximately one thousand prophecies have already been fulfilled is overwhelming evidence that yet-unfulfilled prophecy will also be fulfilled. For every one prophecy of Jesus’ first coming, there are eight that mention His Second Coming.

Jesus’ disciples believed that He would fulfill the promises related to the first and second comings of Christ, including establishing His glorious kingdom on earth, in which they would sit on thrones judging the twelve tribes of Israel.

Much more can be said here but I want to conclude with this important reminder:

If a major doctrine of the Bible such as the first and second Comings of Christ could be misunderstood, this serves as a warning to each of us today to be mindful of misinterpreting Bible prophecy.

Why did the people in the Old Testament and in Jesus’ ministry misunderstand prophecy?

For example, the Old Testament makes it clear that Jesus’ first coming involved His sufferings, death & resurrection, and that His Second Coming would occur only after a time of great tribulation and trouble in which Israel would be rescued by the return of Christ.

This became more evident in the New Testament after He ascended. Perhaps then did the disciples realize that the First Advent related to His sufferings and death, and the Second Coming relates to His glorious reign, and that they themselves were living in a time period between those two advents. I am sure that they did not expect that time period to last over two thousand years either, but it has.

Let us hope that we, as the Body of Christ do not make the same mistake of failing to pay attention to the details of the prophecies concerning the Second Coming of the LORD. Let me also add that the Rapture of the Church precedes His Second Coming.

Revelation 2:29— He that hath an ear, let him hear what the Spirit saith unto the churches.