As Nepal is still trying to recover from the massive earthquake that struck Kathmandu last week, seismic activity has continued to be on the uptick.

Did you know that Michigan was just hit by the worst earthquake the state has seen in over 60 years? The earthquake with a magnitude of 4.2 was measured around 12:23 p.m. about nine miles southeast of Kalamazoo, near Galesburg. 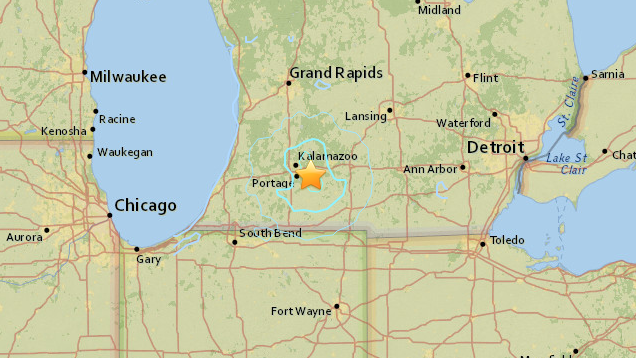 Dozens of residents in several different regions beyond Kalamazoo — from Mount Pleasant and Sterling Heights to Lansing and even as far as Cleveland, Ohio.

All over the planet, seismic activity is increasing. North Texas was rattled once again with an earthquake last Sunday morning, measuring at 3.2 magnitude. Even Mississippi was just hit by two of them. According to the USGS, a magnitude 3.0 earthquake and a magnitude 3.2 earthquake shook up the residents of Canton, Mississippi over the weekend. Two earthquakes — a magnitude 4.1 and a 4.2 — jolted north Idaho last week. Folks, these are quakes that are happening in diverse places.

As a matter of fact, even the number of volcanoes erupting right now is greater than the 20th century’s average for an entire year.

It is being reported that lava is flowing on the floor of Halema’uma’u crater in Hawaii. This is one of the largest volcanoes in Hawaii and is spewing lava for the first time in more than 30 years…

An undersea volcano situated 300 miles off the coast of Oregon is thought to be erupting after signs of magma were spotted near its deep sea vent. For the last week  the region has experienced thousands of tiny earthquakes – a sign that magma is moving towards the surface.
Geologists predicted the volcano, called Axial Seamount (a sign that magma is moving toward the surface.) The seafloor has also reportedly dropped by almost 8 feet!

At the same time, the surface of the sun has become very quiet.

It is believed that times of very low solar activity have something to do with a rise in seismic activity, and there is one scientist that is claiming that solar activity is declining faster “than at any time in the last 9300 years” right now. So what does this mean for the future of our planet?

Scientists have known that there is a link between activity on the sun and seismic activity on our planet.

A 1967 study published in the Earth and Planetary Science journal, stated: “Solar activity, as indicated by sunspots, radio noise and geomagnetic indices, plays a significant but by no means exclusive role in the triggering of earthquakes.”

A 1998 report by a scientist from the Beijing Astronomical Observatory… “Earthquakes occur frequently around the minimum years of solar activity.”

As reported on NewScientist.com and numerous other science sites, including Space.com, the sun has recently entered into its lowest (minimum) actively levels in four centuries, coinciding with an increase in global seismic activity. “Solar activity is declining very fast at the moment,” Mike Lockwood, professor of space environmental physics at Reading University, UK, told New Scientist. “We estimate faster than at any time in the last 9300 years.”

The book of Revelation foretells five specific powerful earthquakes preceding and surrounding Christ’s Return. Each is unique, and occurs at a particular juncture of God’s final prophetic timeline. (Please see my previous post “Whole Lotta Shakin’ Goin On”) Here is the link: https://bibleprophecyfortoday.com/2015/04/25/whole-lotta-shakin-goin-on/

So where and when in the Bible do we see a change or reduction in solar activity? I am glad you asked……..

If we have indeed entered a time of decreased solar activity, that could mean that seismic activity on our planet will continue to increase.

Could what we are witnessing be a prelude to what is to come in the very near future when the Seal, Trumpet and Bowl judgments are to be released on this earth?

The time to know Jesus Christ as your Lord and Savior is now. The time to get saved is now. Again I urge you to receive the free gift of salvation that awaits you.