This “CERN'”tainly Deserves Another Look

I am piecing together a few older posts with some updated information that may be very thought provoking but should definitely be examined with a dis-CERN-ing eye…….

In 2010, in a tunnel underneath the Swiss-French border, 20 billion proton particles were literally “smashed” into one other at nearly the speed of light. The machine that made those collisions happen is known as the “Large Hadron Collider” or LHC.

The LHC is held in a 17-mile tunnel 300 feet under the border between Switzerland and France near Geneva. At full power, trillions of subatomic particles also referred to as protons race around the LHC ring well over 11,000 times a second. As mentioned earlier the protons zip through the tunnel at nearly the speed of light. 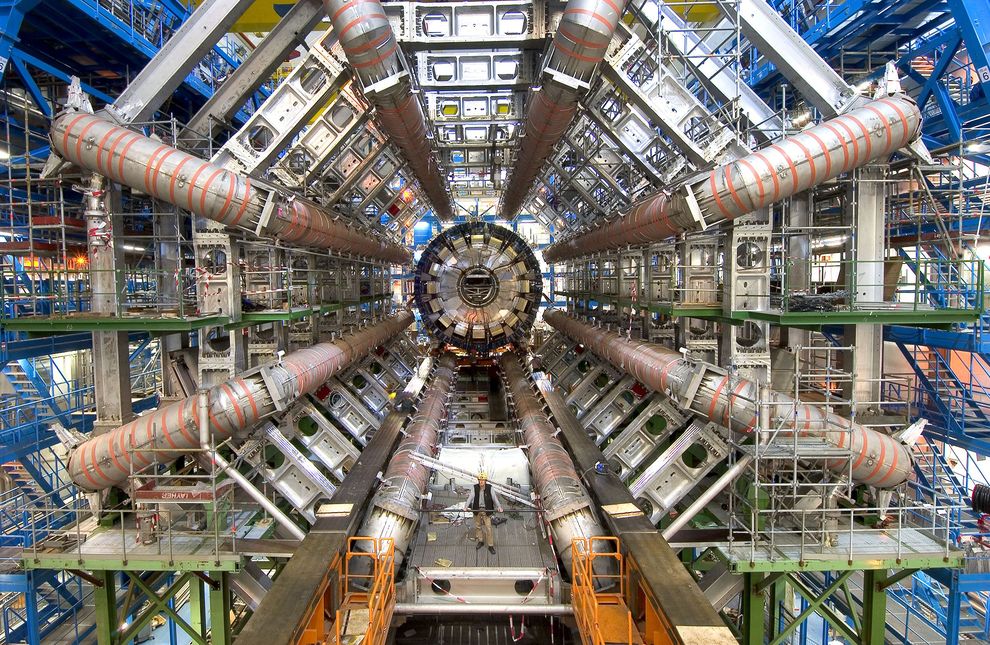 When the proton beams collide they generate temperatures more than 100,000 times hotter than the sun. So to keep the ring from burning up, liquid helium chills it to a cool minus 456 degrees Fahrenheit.

The LHC is run by the European Organization for Nuclear Research, also known as CERN. More than 10,000 scientists, engineers and technicians from 80 countries, including the United States, are involved in the experiment(s).

By smashing these particles, scientists had hoped to go back in time to what the world was like a billionth of a second after the universe was created.

One major part of this experiment included the search for the Higgs Boson, a theoretical particle that scientists believe is critical to understanding how the universe functions. The Higgs has also been called the “God Particle.”

Also if you read Colossians 1:16 it states:

Colossians 1:16—For by Him were all things created, that are in heaven, and that are in earth, visible and invisible, whether they be thrones, or dominions, or principalities, or powers: all things were created by him, and for him:

The Bible says that: the invisible of GOD, turns to visible form His Word in the Creation”…so could it be that when God said, “Let there be light..,” then immediately what scientists aptly refer to as the Higgs boson, or the “God Particle” was created and nuclear fusion took place?

In an atomic explosion matter is turned into radiation. Fission is the breakdown of one material to make another, different material. In the process a great deal of heat and light is also released as a byproduct of that breakdown. Our universe is made of space-time, but that universe exists inside of what one might called the “physical realm.”

While parts of the scientific community are wanting to find the “God particle,” others are concerned about the possibility of either creating a tear in the very fabric of space-time or a black hole that could harm the planet. In the past, these experiments were conducted with only a small fraction of the power the collider can generate.

This year the LHC is set for running at almost double the energy of the LHC’s first run. This machine has firing up to generate a magnetic field that is 100,000 times more powerful than Earth’s! Is it possible that the Large Hadron Collider could open a doorway to an extra dimension and out of this door might something wicked this way comes? Will people come face-to-face with this dark matter??

Scientists want to find out why we are here? What happened in the very beginning? How is it possible that life exists in this universe? They now believe that they finally have the chance to study that in the laboratory by just recreating the conditions as they were at that time. Is this work being conducted at the LHC all about the search for the truth of the universe?

In just the past two months, there have been thirteen earthquakes over 6.0 on the Richter scale. Some of these quakes were incredibly intense, especially the one which occurred in Nepal. We now know the damage was enormous and the loss of life was in the thousands. Most recently, a magnitude 7.1-7.5 rattled the island shores of Papa New Guinea, and many quakes and aftershocks are being reported in this area.

In regards to all of this recent tectonic activity, it is interesting to note that CERN in Geneva, Switzerland has recently fired up its Large Hadron Collider particle accelerator again. This occurred just before these unusual stretches of high-magnitude earthquakes began.

The LHC is the most powerful and largest particle accelerator on the planet and even Stephen Hawking has clearly warned about the damage it may cause to the planet, humanity and even the time-space continuum.

Just months after the discovery of the Higgs boson or the so-called “God Particle” in July 2012, CERN completed its first continuous run of the LHC which recorded around 5 billion collisions at an energy amount of 8 TeV (Tevatron scale). Only 400 of these collisions produced results even remotely compatible with that of the Higgs boson.

As of this year they’ve nearly doubled the amount of collision energy to 13 TeV. The current plan is to have the Large hadron Collider do another run for 3 years continuously and this time CERN announced that their focus is to “capture dark matter” and on “the discovery of other dimensions”.

Now here is where things get very interesting. There just may be a link between the Large Hadron Collider and seismic activity.

Each time CERN forces a collision, the residue energy causes massive magnetic vibrations within the Earth. Could this somehow be related to all of the recent quakes. Keep in mind that in 2010, mass LHC activity at CERN coincided with the 8.8 Chilean earthquake­, which was a megaquake.

That being said, is there some sort of a connection between the timing of these earthquakes and the recent power up of the Large Hadron Collider.

It is being reported that CERN is massively interfering with earth’s natural magnetic balance. The Collider was active when the quake in Nepal struck and in the previous two times that CERN was active, there was an uptick in earthquakes and at the same time a previously unknown particle was discovered at CERN.

Remember I stated in a previous post that before the Age Enlightment, Science and the Occult were together. After the Age Enlightment there was a division between the two and I believe that prior to the return of the LORD the two will unite again. I am of the impression that the powers shaping the current world events extend well beyond the physical realm. CERN is attempting to identify dark matter at the moment. Dark matter is invisible to the naked eye and is understood to be that which holds matter together. We are looking at the point in history where man intends to connect with forces which transcend science. Could it quite possibly be that those that are searching for the “God Particle” could be opening the gates of hell?

I have always perceived that as we draw closer to the return of the LORD, the veil that separates the spiritual from the natural is rapidly eroding. Perhaps soon people will know if indeed…. is there anybody out there?? Will the results ultimately lead to convincing the masses to believe in Panspermia?

Here is an interesting sermon that may be of our conCERN:

I have always perceived that as we draw closer to the return of the LORD, the veil that separates the spiritual from the natural is rapidly eroding. Perhaps soon people will know if indeed…. is there anybody out there?? Will the results ultimately lead to convincing the masses to believe in Panspermia?