Luke 21:25-26—And there shall be signs in the sun, and in the moon, and in the stars; and upon the earth distress of nations, with perplexity; the sea and the waves roaring; Men’s hearts failing them for fear, and for looking after those things which are coming on the earth: for the powers of heaven shall be shaken.

I have stated for quite sometime now that the veil between the natural and the spiritual is beginning to erode. Just a few days ago, mysterious footage reportedly shot from the International Space Station (ISS), depicting three unidentified flying objects (UFOs) shooting upward out of Earth’s atmosphere. Just recently, a couple was reported to have been attacked sexually by spirit beings. Incubus and Succubus immediately come to mind to those who are familiar with Spiritual warfare.

As a matter of fact priests in Mexico just “attempted” to exorcise demons from the entire country of Mexico. Led by Cardinal Juan Sandoval Íñiguez, the archbishop emeritus of Guadalajara, a group of priests including an exorcist from Spain conducted a closed-door ritual at the cathedral in the city of San Luis Potosí. The religious leaders then performed a ‘Magno Exorcismo’ or Great Exorcism, to help Mexico as it struggles with crimes linked to gang violence and drug trafficking.

Father José Antonio Fortea, the Spanish exorcist and demonologist, told the Catholic News Agency that the ceremony, held on May 20, that this rite of exorcism had never before taken place in any part of the world . The aim of the ceremony was to drive out demons that had been tempting the people of Mexico to sin.

Within different parts of the liturgy according to a book entitled “El Exorciso Magno,” written by Father Fortea, it also includes a section concerning the Door to the Abyss in which one of the participants hits the ground with a ceremonial hammer between calls for the Virgin Mary to close the entrance to Hell and keep the Ancient Snake away. An entrance to Hell?? A door to the Abyss??

The ABYSS can also be translated as BOTTOMLESS PIT. Anyways, back to the NASA video…..

However, the moment the lights appeared to ascend off the planet, the video feed was cut by NASA, with a message displaying on screen stating: “Please stand by.”

“The High Definition Earth Viewing experiment is either switching cameras, or we are experiencing a temporary loss of signal with the International Space Station.” it says.

NASA, has not provided any explanation for the curious lights.

When the term “heaven” is not used symbolically in Scripture, it usually refers to one of three realms.

Hebrews 4:14— Seeing then that we have a great high priest, that is passed into the heavens, Jesus the Son of God, let us hold fast our profession.

The first heaven, also referred to as the  atmospheric heavens include the air that we breathe as well as the space that immediately surrounds the earth. It extends approximately twenty miles above the earth. The space above this is called the “stratosphere.”

The second heaven heaven refers to outer space or the stellar heaven. The third heaven is where God resides. The good news is that God is not limited to one of these regions:

1 Kings 8:27—But will God indeed dwell on the earth? behold, the heaven and heaven of heavens cannot contain thee; how much less this house that I have builded?

Deuteronomy 10:14—Behold, the heaven and the heaven of heavens is the Lord’s thy God, the earth also, with all that therein is. 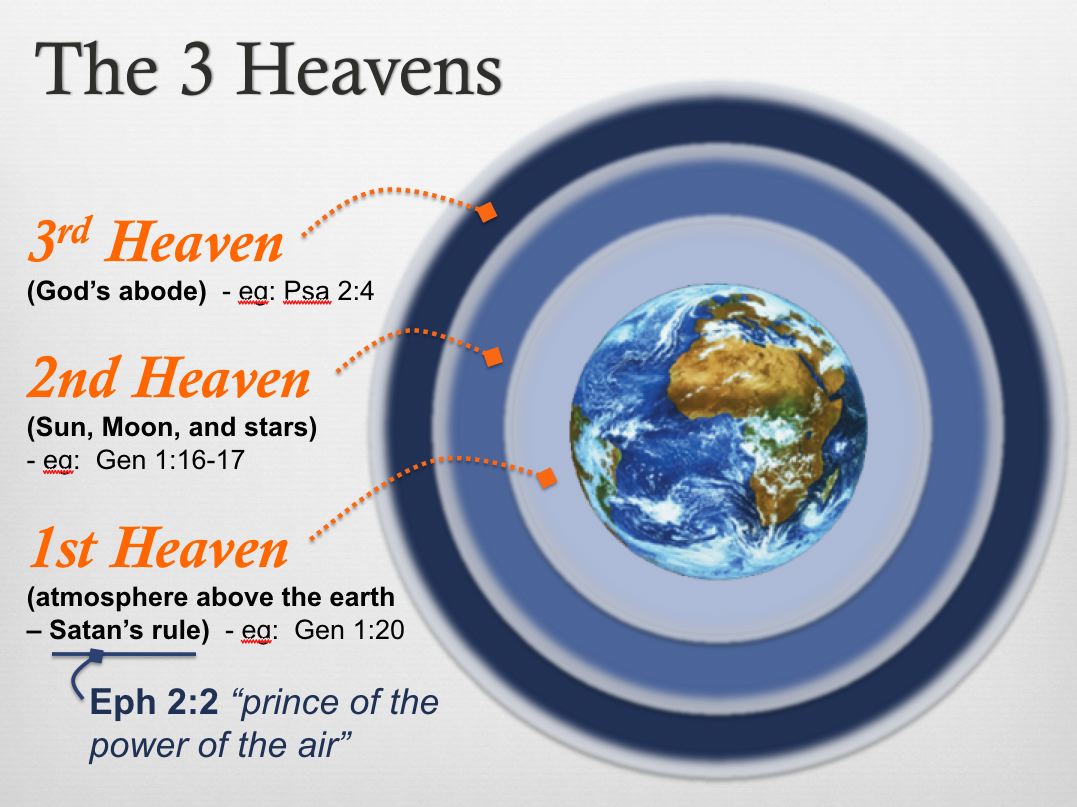 Our adversary and his (do)-minions have access to these realms:

Ephesians 2:2—And you hath he quickened, who were dead in trespasses and sins; Wherein in time past ye walked according to the course of this world, according to the prince of the power of the air, the spirit that now worketh in the children of disobedience…

Ephesians 6:10-12—Finally, my brethren, be strong in the Lord, and in the power of his might. Put on the whole armour of God, that ye may be able to stand against the wiles of the devil. For we wrestle not against flesh and blood, but against principalities, against powers, against the rulers of the darkness of this world, against spiritual wickedness in high places.

The fact of the matter is that as we approach the return of the LORD, things are going to get very interesting. I am of the impression that it is a certainty that in the very, very near future, UFO disclosure is imminent.