Matthew 24:7 For nation shall rise against nation, and kingdom against kingdom: and there shall be famines, and pestilences, and earthquakes, in divers places.

Luke 21:11 And great earthquakes shall be in divers places, and famines, and pestilences; and fearful sights and great signs shall there be from heaven.

It goes without saying that as we approach the halfway mark of the year 2016, there has been an increase in both seismic activity and volcanic eruptions. Much of this activity has taken place in a volatile region other wise known as the ring of Fire.

According to the National Geophysical Data Center, earthquakes considered significant must meet at least one of the following criteria: “Moderate damage (approximately $1 million or more), 10 or more deaths, Magnitude 7.5 or greater, Modified Mercalli Intensity X or greater, or the earthquake generated a tsunami.”

Many of the larger quakes that occurred this year have been in this region. Surprisingly, a certain area seemed unaffected by these quakes: 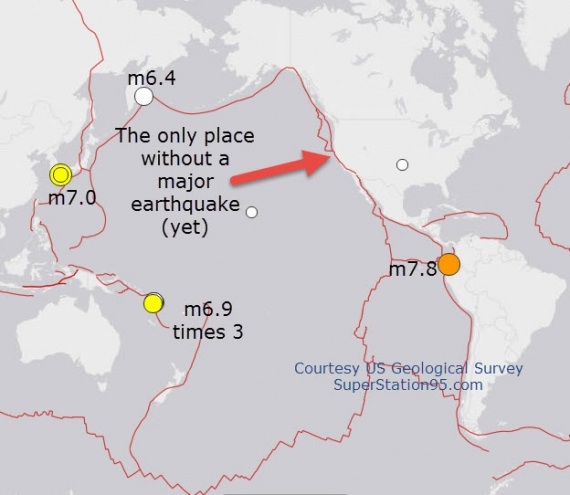 That was until last week. As of last week, it is being reported that there now has been highly unusual seismic activity along major fault lines in California.

Scientists have been warning us for the longest time that we are actually way overdue for “the Big One” A quake that is in the 9.0+ range and may be accompanied by a tsunami.

The crust of our planet is becoming increasingly unstable. As we enter the midway point of the year 2016, we have witnessed a series of very disturbing earthquakes and volcanic eruptions.

At some point there will be major volcanic eruptions along the west coast.

At some point there will be major earthquakes along the west coast. This may also be accompanied by major volcanic eruptions.

Is Bible prophecy being fulfilled?

Well there certainly have been great earthquakes in diverse places. In the past year or so, there were substantially more major earthquakes than the prior year or so. An increase in seismic activity is consistent with Biblical prophecy.