As we continue with this series, we must understand the importance of the eternal nature as well as the temporal nature of redemption. When we are “born-again,” our old self is crucified and we are redeemed to both go to Heaven and to reign with Christ in the Millennium. Yet while on earth, which is our temporal abode, we all fulfill a purpose in this temporal life on this temporal earth. This is done collectively as the body of Christ so that we can ultimately facilitate the coming of the future kingdom.  Our navigation device on this earth is the Holy Bible itself:

II Timothy 3:16-17—All scripture is given by inspiration of God, and is profitable for doctrine, for reproof, for correction, for instruction in righteousness: 17 That the man of God may be perfect, thoroughly furnished unto all good works.

Some may say, “Oh, well you are so heavenly-minded that you’re of no earthly good.” I beg to disagree. Being correctly heavenly-minded if anything should directly affect your conduct on earth. Whether or not we, as born-again believers fulfill such a calling will then determine the very magnitude of our status and rewards when Christ does return. (Please see the previous posts on this website: Crowns & Rewards & Stages of Salvation Parts I & II.)

As mentioned in the previous post, the strong emphasis on the fact that Enoch walked with God is synonymous with that of a New Testament believer who is striving to walk in the spirit:

Romans 5:8-11— For they that are after the flesh do mind the things of the flesh; but they that are after the Spirit the things of the Spirit. 6 For to be carnally minded is death; but to be spiritually minded is life and peace. 7 Because the carnal mind is enmity against God: for it is not subject to the law of God, neither indeed can be. 8 So then they that are in the flesh cannot please God. 9 But ye are not in the flesh, but in the Spirit, if so be that the Spirit of God dwell in you. Now if any man have not the Spirit of Christ, he is none of his. 10 And if Christ be in you, the body is dead because of sin; but the Spirit is life because of righteousness. 11 But if the Spirit of him that raised up Jesus from the dead dwell in you, he that raised up Christ from the dead shall also quicken your mortal bodies by his Spirit that dwelleth in you.

There is another rapture that takes place in the Bible that is the rapture of the prophet Elijah:

What one must understand in regards to Elijah’s ministry is that God raised him up to deal with Ahab and Jezebel and the priests of Baal among other things.

Baal  was considered the god of fertility in all aspects of life—human, animal, and vegetable. Production and prosperity were dependent on Baal. The Ras Shamrah text, an important archaeological find, praises Baal as the god who has power over rain, thunder, lightning, wind, clouds and dew, and, consequently, over fertility. Baal was also worshipped as the weather god, the god of storm, of rain and good crops.

Worship was localized so that each area worshipped its own Baal. A name from the city or place where Baal was worshipped was frequently added. This resulted in a variety of names like Baal-Meon, Baal-Hermon, Baal-Hazor, Baal-Zebub, Baal-Marduk, etc.

1 Kings 16:29-33–And in the thirty and eighth year of Asa king of Judah began Ahab the son of Omri to reign over Israel: and Ahab the son of Omri reigned over Israel in Samaria twenty and two years. 30 And Ahab the son of Omri did evil in the sight of the Lord above all that were before him. 31 And it came to pass, as if it had been a light thing for him to walk in the sins of Jeroboam the son of Nebat, that he took to wife Jezebel the daughter of Ethbaal king of the Zidonians, and went and served Baal, and worshipped him. 32 And he reared up an altar for Baal in the house of Baal, which he had built in Samaria. 33 And Ahab made a grove; and Ahab did more to provoke the Lord God of Israel to anger than all the kings of Israel that were before him. 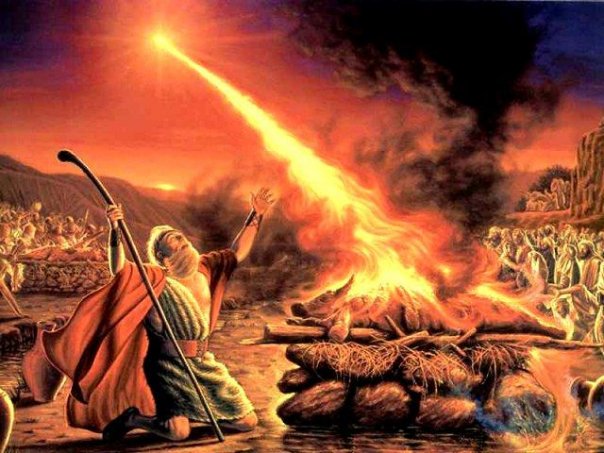 1 Kings 18:17-39— And it came to pass, when Ahab saw Elijah, that Ahab said unto him, Art thou he that troubleth Israel? 18 And he answered, I have not troubled Israel; but thou, and thy father’s house, in that ye have forsaken the commandments of the Lord, and thou hast followed Baalim. 19 Now therefore send, and gather to me all Israel unto mount Carmel, and the prophets of Baal four hundred and fifty, and the prophets of the groves four hundred, which eat at Jezebel’s table. 20 So Ahab sent unto all the children of Israel, and gathered the prophets together unto mount Carmel. 21 And Elijah came unto all the people, and said, How long halt ye between two opinions? if the Lord be God, follow him: but if Baal, then follow him. And the people answered him not a word. 22 Then said Elijah unto the people, I, even I only, remain a prophet of the Lord; but Baal’s prophets are four hundred and fifty men. 23 Let them therefore give us two bullocks; and let them choose one bullock for themselves, and cut it in pieces, and lay it on wood, and put no fire under: and I will dress the other bullock, and lay it on wood, and put no fire under: 24 And call ye on the name of your gods, and I will call on the name of the Lord: and the God that answereth by fire, let him be God. And all the people answered and said, It is well spoken. 25 And Elijah said unto the prophets of Baal, Choose you one bullock for yourselves, and dress it first; for ye are many; and call on the name of your gods, but put no fire under. 26 And they took the bullock which was given them, and they dressed it, and called on the name of Baal from morning even until noon, saying, O Baal, hear us. But there was no voice, nor any that answered. And they leaped upon the altar which was made. 27 And it came to pass at noon, that Elijah mocked them, and said, Cry aloud: for he is a god; either he is talking, or he is pursuing, or he is in a journey, or peradventure he sleepeth, and must be awaked. 28 And they cried aloud, and cut themselves after their manner with knives and lancets, till the blood gushed out upon them. 29 And it came to pass, when midday was past, and they prophesied until the time of the offering of the evening sacrifice, that there was neither voice, nor any to answer, nor any that regarded. 30 And Elijah said unto all the people, Come near unto me. And all the people came near unto him. And he repaired the altar of the Lord that was broken down. 31 And Elijah took twelve stones, according to the number of the tribes of the sons of Jacob, unto whom the word of the Lord came, saying, Israel shall be thy name: 32 And with the stones he built an altar in the name of the Lord: and he made a trench about the altar, as great as would contain two measures of seed. 33 And he put the wood in order, and cut the bullock in pieces, and laid him on the wood, and said, Fill four barrels with water, and pour it on the burnt sacrifice, and on the wood. 34 And he said, Do it the second time. And they did it the second time. And he said, Do it the third time. And they did it the third time. 35 And the water ran round about the altar; and he filled the trench also with water. 36 And it came to pass at the time of the offering of the evening sacrifice, that Elijah the prophet came near, and said, Lord God of Abraham, Isaac, and of Israel, let it be known this day that thou art God in Israel, and that I am thy servant, and that I have done all these things at thy word. 37 Hear me, O Lord, hear me, that this people may know that thou art the Lord God, and that thou hast turned their heart back again. 38 Then the fire of the Lord fell, and consumed the burnt sacrifice, and the wood, and the stones, and the dust, and licked up the water that was in the trench. 39 And when all the people saw it, they fell on their faces: and they said, The Lord, he is the God; the Lord, he is the God.

We read in the above account that the priests of Ba’al, who were actually Hebrew priests seduced by the paganistic beliefs of Queen Jezebel, could not make it rain when they called upon their God Ba’al.   Why am I mentioning this and how does it apply to us today?

Interestingly, Jesus Christ referred to Queen Jezebel (metaphorically speaking) to point out false religion and spiritual seduction which would be taking place in the Church prior to His return. OUCH!!!

Revelation 2:19-24—And unto the angel of the church in Thyatira write; These things saith the Son of God, who hath his eyes like unto a flame of fire, and his feet are like fine brass; 19 I know thy works, and charity, and service, and faith, and thy patience, and thy works; and the last to be more than the first. 20 Notwithstanding I have a few things against thee, because thou sufferest that woman Jezebel, which calleth herself a prophetess, to teach and to seduce my servants to commit fornication, and to eat things sacrificed unto idols. 21 And I gave her space to repent of her fornication; and she repented not. 22 Behold, I will cast her into a bed, and them that commit adultery with her into great tribulation, except they repent of their deeds. 23 And I will kill her children with death; and all the churches shall know that I am he which searcheth the reins and hearts: and I will give unto every one of you according to your works. 24 But unto you I say, and unto the rest in Thyatira, as many as have not this doctrine, and which have not known the depths of Satan, as they speak; I will put upon you none other burden.

Jezebel, a Phoenician princess, was the daughter of King Ethbaal of Sidonia, another name for Phoenicia. King Ethbaal reigned in Tyre, probably over all Phoenicia. The name “Ethbaal” means with him is Baal. He was originally priest of Ashtoreth, goddess and consort of Ba’al, in Tyre. The Jewish historian Josephus reported that at the age of 36 he conspired against the Tyrian king, Pheles, killed him, and seized the throne. His reign lasted 32 years, and he established a dynasty which continued for at least another 62 years.

This tells us something about Jezebel’s heritage. She came from a royal household that had taken power from other rulers, so she was probably well-schooled in political intrigue. Her name in Phoenician translates roughly as The Lord [Ba’al] exists, but in biblical Hebrew her name means without nobility. That speaks very much of her character, doesn’t it?(To be Continued….)